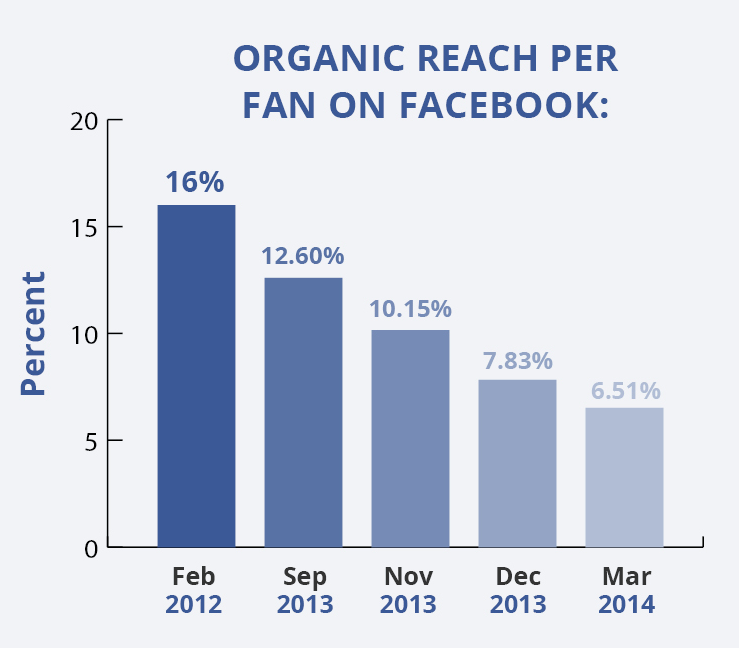 In 2011 I was working for an online poker company. But when the FBI suspended our website, it was time to try something else.

I rushed into a role with Ireland’s largest charity and found that something strange was going on with Concern Worldwide’s Facebook page… Most of their Facebook followers saw their posts. And many of them were actually engaging with them.

Every post got over 100 Likes. This was 5 − 10 times what the global poker company, with 60+ online marketing staff, typically received.

I couldn’t understand how this was happening.

This was back when Facebook had just started talking about promoted posts and I, like pretty much everybody, believed that the evil Zuckerberg had tricked companies into buying followers, which they would then have to pay to reach.

I’d seen the graph depicting the decline in organic reach across all industries.

Yet at Concern Worldwide I met a digital team of borderline hippies who seemed blissfully unaware of this trend. They were just doing their own thing. They were more concerned with making organic soap than talking about organic reach. One of them had a ginger afro and swanned around the office in his socks. All three, however, held masters degrees in English Literature and, on average, their Facebook posts reached over 50% of their followers.

When they posted Achoyo’s story, it reached over 200% of their Facebook followers… which I had thought was impossible. 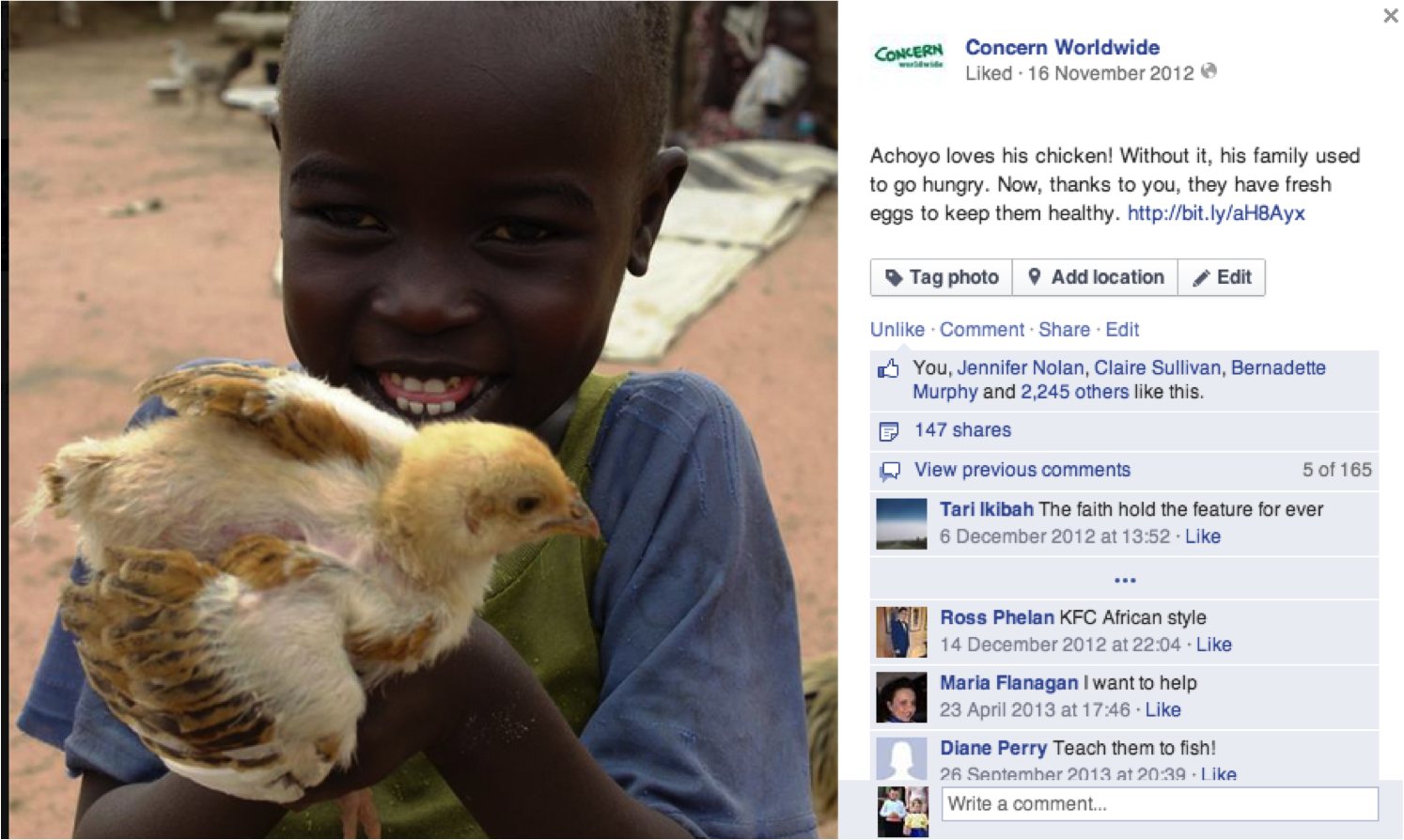 So what were they doing?

Well, as you’d expect, there wasn’t one thing they were doing well…there were a number of things. They:

Concern was full of hardcore fundraisers, who spoke the direct-marketing language of reach, calls-to-action and response rates. They wanted to tell a heart-breaking story and ask people for their cash, but this wasn’t working. At all. The guys shared these results and started saying no to most of these requests.

Then they had space to experiment and find out what worked on Facebook. Once they started to find tactics that people engaged with, they repeated them.

2) Talked about the people they were helping.

Social media is a SOCIAL media format. People log-in expecting to see other people and what’s changed in their lives. Think about the posts that get the most Likes in your newsfeed, they’re usually about people’s holidays, or weddings or graduation ceremonies. These are all life-changing events. These are what Facebook users want to see.

People don’t log-in to Facebook to see what a 50-year-old organization has been up to. They don’t care.

But a lot of charities are self-absorbed. They are too close to the important work they do and they end up using the words “we” and “our” almost every time they communicate.

Concern made every post about one person who’d life they’d changed.

They found an approach that showed the impact of their work and was aligned with the content that already does well on Facebook.

3) Posted stories of adversity, with a happy ending.

Every good story needs a beginning, a middle and an end. I remember this point being stressed in an English class when I was eight and it’s still crucial to good storytelling.

I’d heard a lot of vague and annoying buzz about storytelling, but at Concern they broke it down for me.

Beginning — The person’s problem / what their life was like before.

Middle — The event that changed their life.

End — The person’s life (or smile) now that the problem has been solved.

Showing the before and after in one post was key.

Too often charities communicate either the good or the bad. You hear things like “The situation is desperate.” or “This is amazing!”, but rarely combine them in a story.

When you do show both, in a coherent way, the results are well… see for yourself. 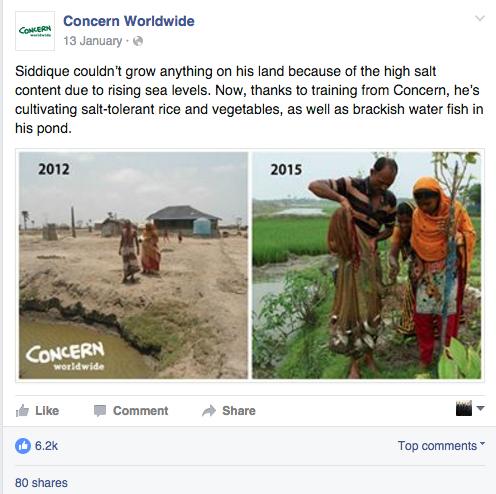 Charity:water are aware of this.

So is the man behind the most popular Facebook page of them all (by far) Humans of New York. 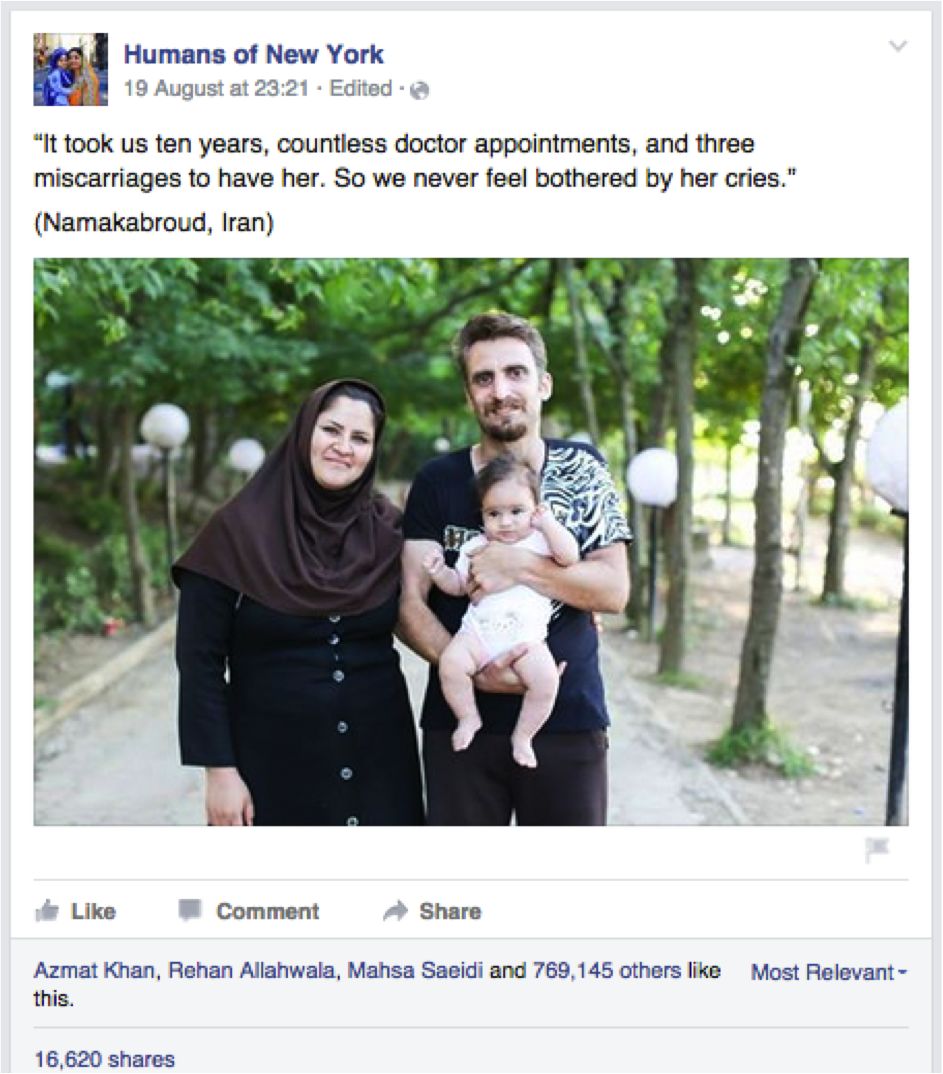 Almost every HONY post follows the same story structure (except sometimes their posts have sad endings instead of happy ones).

It was obvious to me that there are principles for telling a good story. And once I was aware of them I started to see them in movies, in books and even in advertising.

There is no penalty if you don’t post for a week or two. But Facebook does penalize you every single time a person scrolls past one of your posts without clicking on it. Some social media experts will tell you have to post every day, but really, how many of your supporters want to hear from you more than 300 times a year?

The poker company I worked for, like most organizations, posted every day and ruined both their engagement. Concern only posted once a week.

They stepped off the social merry-go-round and looked for moving stories. They thought deeply about the wording and how to make stories shorter.

The result of all this work was an 1809% increase in engagement that Facebook themselves highlight as a success story. As well as several successful text donation campaigns.

Individually, you’ve probably heard each of these before. But applying them consistently has yielded results which are rare. And this has become more obvious to me since leaving Concern and working as a freelancer.

People who post every day and get hardly any engagement are often lost and demoralized.

The very good news is that Facebook has become really good at knowing what it’s users Like. If you start posting good stories, it notices…fast.

Even I, who not that long ago wouldn’t have known an unrestricted fund if it punched me, have managed to apply these tips and turn a charity’s Facebook page around. 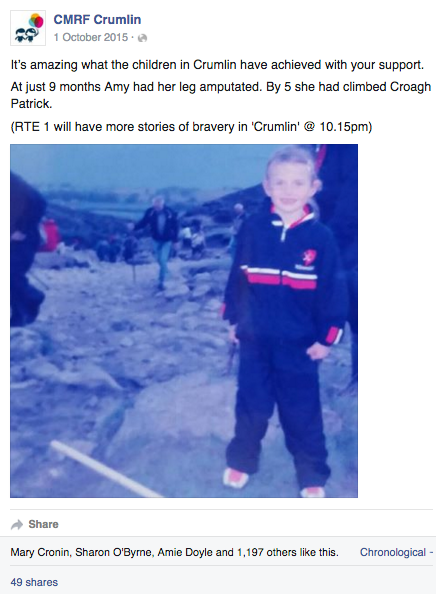 Encouraged by these results, I jumped at the chance to work on on the social media strategy of a Baltimore-based NGO called Jhpiego. Unlike Concern and CMRF Crumlin, who have tens of thousands of donors, Jhpiego are just starting to fundraise from the public.

They have less than 1% brand awareness in the US. But this didn’t stop their stories succeeding on Facebook.

In less four months Jhpiego went from just 10 − 20 Likes per post… to regularly getting over a thousand: 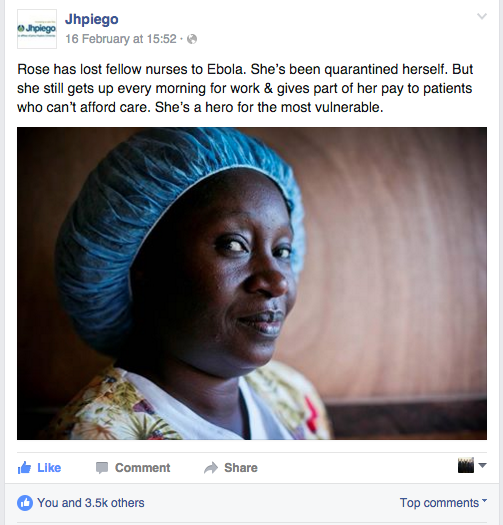 Now for the really astounding bit.

Jhpiego have 1 staff member dedicated to digital/social and very little budget for promoting posts. Yet, in four months, they’ve gone from obscurity to outperforming the the biggest NGOs in the United States.

Nobody knows who Jhpiego are… but that doesn’t matter.

This storytelling is all that matters.

The opportunity that exists on Facebook, was summarized by the Head of Creative for Facebook EMEA at an event I attended last year, he said,

“The Facebook newsfeed is an intimate place where people interact with other people. Every charity is sitting on a well of human stories that they just need to bring to the newsfeed. Because of this, charities have an advantage over companies on Facebook.”

Take advantage of this.

Tell better stories and you're Facebook page will turn around. 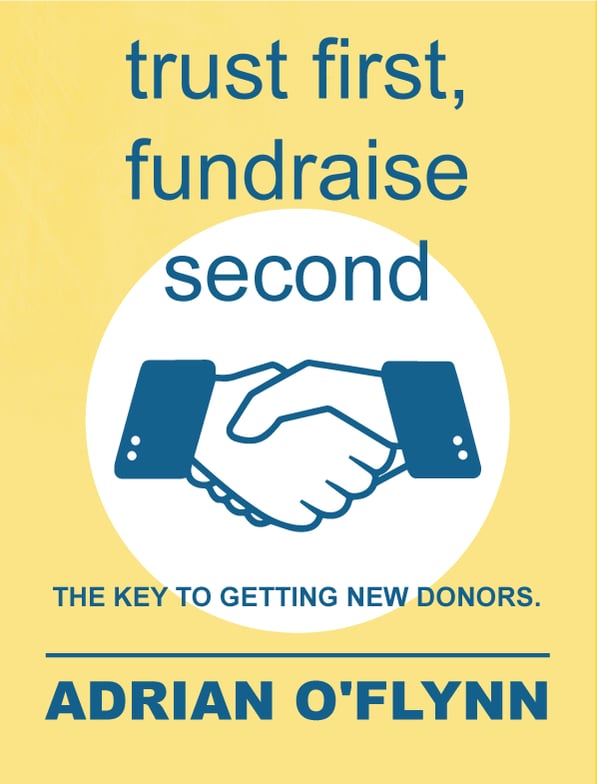